A downloadable game for Windows, macOS, and Linux

This was made for LOWREZJAM2017.

A city-building card game based on power usage. Play through a deck of 52 cards to build a city, stacking cards in mixed-use buildings in a transit-oriented city. Balance each building's electricity usage to avoid losing power.

This game can also be played with a regular deck of cards; see the last section PLAY WITH A DECK OF CARDS.

You start with 2 cards. Choose one to right-click and play as transit, then place the other one beside it. All other cards must be placed beside transit.

Stack up to 4 cards on one tile (except for transit, parks, and plazas; those can't be stacked). Make sure each tile has positive power usage or it won't score points.

There are 52 cards in the deck. Play through the entire deck, 5 cards at a time.

Tiles with negative power usage do not score points that hand and also knock out the power of neighbouring tiles.

Points multipliers:
A tile's points are multiplied for having multiple business, culture, or civic cards (x2, x3, or x4). Points are also multiplied when adjacent to parks and plazas. For example, a tile beside a park with two businesses gets x3. Another example: a tile with three businesses beside two parks gets x5.

Most cards have a + or - beside their number which indicates whether they add or remove power from your city's power grid. On a single tile, the total power usage must be positive (0 is positive). A tile with negative power usage will knock out its power and its neighbours'. Power can be restored by adding more positive cards, if there is room.

Transit
Rail icon. Flip over any card (right click) to turn it into a transit card. Lets you place other cards beside it.

Residential
House icon. Numbered 2-9. Most common card in the deck.

PLAY WITH A DECK OF CARDS

This game can be played with a regular deck of cards:

For scoring, it is easier to wait until the game is over before calculating points instead of trying to do it after each hand (you can if you want to). 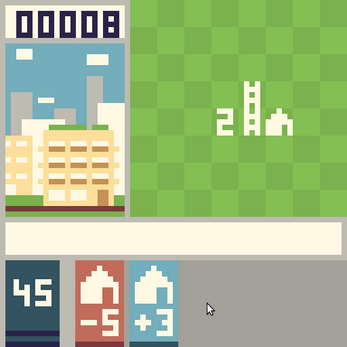 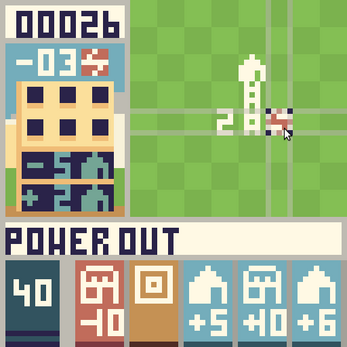